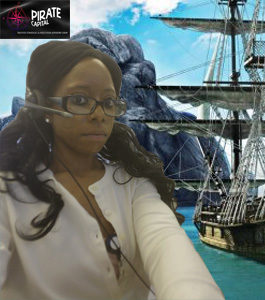 info@piratecapital.co​
123456789
Arielle J. Fletcher  joined Pirate Capital LLC as part of the client’s communication group with strong communication skills with a dedication to quality and results. She works well with others and manages situation under high pressure and deadline for all to calmly achieve our clients’ goals. A Director of Clients Communication and Relations at Pirate Capital, Arielle is also helping with presentation and structuring presentation meeting coordination and scheduling, but also introductions and coaching presentations and pitches. She is well versed Microsoft Word, Works, Outlook, PowerPoint, light Excel, Internet Searches, and a clear, concise speaking techniques and voice. Prior to Pirate Capital LLC Arielle ran the media and communication department at the Saint Barnabas Medical Center.

Where she has received several letters and “High Five Awards” for her hard work and dedication while employed at Saint Barnabas Medical Center, before that she worked at JSBarkats PLLC a leading law firm as head of communications for all Crowdfunding related deals and the capital markets group helping firm’s client differentiate themselves from the rest of the pack and pitch their offerings.

Arielle Graduated Bloomfield College in New Jersey in 2011 with a B.A in American Literature, British Literature, Western Literature, Mass Media, Academic Writing, Media Writing, Public Speaking, she was dean’s list with her major in Algebra, Math for Liberal Arts, Political Science, Computer Literacy, and was recognized for her graduation thesis on History of Capitalism.