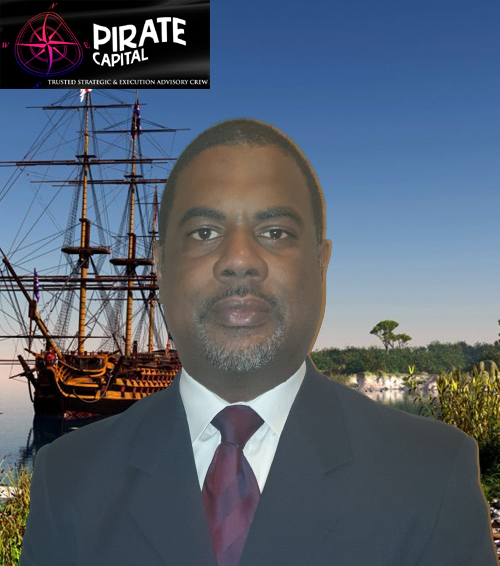 Dr. Wilton McDonald II, Esq. joined Pirate Capital since inception in 2019 to head the Off Shore legal group. Wilton is responsible for providing legal services to Cayman and BVI domiciled funds, as well as several other jurisdictions. Wilton has over 27 years of public accounting, financial services and legal experience setting up over 800 hedge funds, and has worked closely with start-ups as well as “blue chip” investment fund managers, administrators and onshore counsel, based primarily in the USA, United Kingdom, Luxembourg, Switzerland, Brazil, Hong Kong/ China, UAE-Dubai, Abu Dhabi, Russia, and Japan.

Wilton also serves as independent director and advisor to the alternative investment community. Wilton’s investment funds practice has afforded him the opportunity to gain experience in general corporate, partnership, trusts, and commercial law, liquidations, as well as experience in securities, secured lending transactions, and IPOs/ stock exchange listings. He also started representing Crypto and Blockchain based companies with the need to launch ICOs, STO or IEO overseas.

By way of background, Wilton is a retired Fellow of the ACCA in the United Kingdom (2001). He was admitted to the bar in 2004 as an Attorney/ Barrister in the Cayman Islands, Jamaica, and the British Virgin Islands, and in 2002/ 2003 as an Attorney in Connecticut (ret), and New York, USA. In January 2020 he was admitted to the roll of foreign lawyers in the Republic of Poland as part of the E.U.

Dr. McDonald helped to grow several start-up practices attached to CIMA licensed administrators during 2013- 2020 billing just under US$ 5 million before such entities were eventually sold.

Prior to establishing his own consulting firm, Iberia Legal in 2010, Wilton built a US$ 3.5 million practice at Truman Bodden & Co. as Head of the Investment Funds Dept. (between 2006 -2010). Wilton was also employed as an investment funds associate at Ogier and Lennox Paton, Nassau, Bahamas. Wilton completed a BSc/ BBA degree from Northern Caribbean University, an MBA from Andrews University, a Bachelor of Laws (2:1 Hons.) degree from University College London, a Master of Laws degree from Fordham Law School and completed the residence requirement for the Doctor of Juridical Science degree at Cornell Law School in Ithaca NY. dr. McDonald completed the Council of Legal Education Certificate and obtained a certificate in company law from the Université de Paris I and the Panthéon-Sorbonne He was awarded the Doctor of Business Administration degree in Rome, Italy in January 2020 and completed pre and post-doctoral studies in finance and economics at two universities in Poland including the Warsaw School of Economics.

Dr. McDonald is currently completing post-doctoral research and an executive leadership program at Saïd Business School, Oxford University. Wilton’s post graduate research has always focused on derivatives and their impact on the stability of US banks. His first academic paper was published in 2004: “Financial Accounting Standard (FAS) No. 133 Accounting for Derivatives- Do the New Regulations Decrease Operating Risk and Prevent Ultimate Failure of Banking Institutions in Light of the Basel Committee’s Capital Accord?,” 37 UWLA Law Review, 138 (2004).

The information contained in this website is for general information purposes only. The information is provided by Pirate Capital and while we endeavor to keep the information up to date and correct, we make no representations or warranties of any kind, express or implied, about the completeness, accuracy, reliability, suitability or availability with respect to the website or the information, products, services, or related graphics contained on the website for any purpose.